Via Matris ( The Mother’s Way ) or The Seven Stations

Modelled on the Via Crucis, the pious exercise of the Via Matris Dolorosae, or simply the Via Matris, developed and was subsequently approved by the Apostolic See. This pious exercise already existed in embryonic form since the sixteenth century, while its present form dates from the nineteenth century. Its fundamental intuition is a reflection on the life of Our Lady from the prophecy of Simeon, to the death and burial of her Son, in terms of a journey in faith and sorrow: this journey is articulated in seven “stations” corresponding to the “seven dolours” of the Mother of Our Savior.

Since the sorrows of Our Lady are caused by the rejection of her Son, the Via Matris constantly and necessarily refers to the mystery of Christ as the suffering servant. It also refers to the mystery of the Church: the stations of the Via Matris are stages on the journey of faith and sorrow on which the Virgin Mary has preceded the Church, and in which the Church journeys until the end of time.

As Christ was the “man of sorrows” (Is 53, 3) through whom it pleased God to have “reconciled all things through him and for him, everything in heaven and everything on earth, when he made peace by his death on the cross” (Col 1, 20), so too, Mary is “the woman of sorrows” whom God associated with his Son as mother and participant in his Passion.

By praying the Via Matris “we meditate on the sorrows of Our Lady who was intimately associated with the Passion of Her Divine Son.”

The highest expression of the Via Matris is the Pietà which has been an inexhaustible source of inspiration for Christian art since the middles ages. 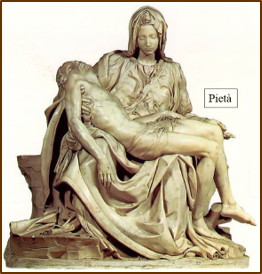