Saint Bridget (or Birgitta) of Sweden 1303 – 1373. From childhood, the Lord granted her special graces, visions and an extraordinary understanding of divine mysteries. At age seven, she had a vision of the crucified Jesus in all the suffering and sorrow of his Passion, which enkindled within her a deep devotion for our Savior.

She was married and one of her children was Saint Catherine of Sweden. At age 32, she was known for her charitable acts, especially caring for the sick, and spending much of her time in prayer and penance.

St. Bridget’s visions became more frequent and intense. Her astonishing revelations documented carefully by her confessors, filled several volumes. In fact, Bridget was His voice in her visions that dictated to her to found a new religious order. She then founded The Order of the Most Holy Savior, or Bridgettines.

She also exerted her influence in the cause of the Church’s reform in the courts, episcopal palaces, the abbeys and even at the Holy See.
She was canonized in 1391 by Pope Boniface IX. It was for her practical works of charity, that she was canonized, and not for her revelations. 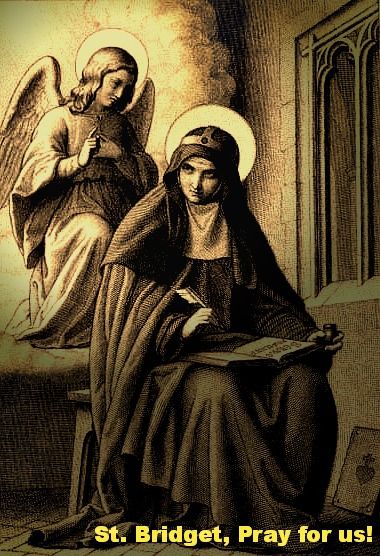 Our Lady lamented to St. Bridget that very few consoled Her by meditating on Her Sorrows and that the greater part of the world lived in forgetfulness of them:

‘I look around at all who are on earth, to see if by chance there are any who pity Me, and meditate upon My Sorrows; and I find that there are very few. Therefore, My daughter, though I am forgotten by many, at least do you not forget Me; consider My anguish, and imitate, as far as you can, My grief.

“At my Son’s death I was like a woman whose heart had been pierced by five spears. The first spear was his shameful and blameworthy nakedness, for I saw my most beloved and mighty Son stand naked at the pillar without any clothing to cover him at all. The second spear was the accusation against him, for they accused him of being a traitorous betrayer and liar, him, whom I knew to be righteous and true and never to have offended or wished to offend or injure anyone. The third spear was his crown of thorns that pierced his sacred head so violently that the blood flowed down into his mouth and his beard and ears. The fourth spear was his sorrowful voice on the cross with which he cried out to the Father, saying: ‘O Father, why have you abandoned me?’ It was as if He wanted to say: ‘O Father, there is no one who pities me but you.’ The fifth spear which pierced my heart, was his most bitter and cruel death. My heart was pierced with as many spears as the arteries from which his most precious blood flowed out of him. In truth, the pain in his pierced sinews, arteries, feet, hands and body went mercilessly to his heart and from the heart back to his sinews; for his heart was healthy and strong and of the finest nature, and life contended long with death; and thus his life was prolonged in the midst of the most bitter pain.

But when his death drew near and his heart burst from the unendurable pain, then his whole body shook and his head, which was bent backwards, raised itself a little. His half-closed eyes opened, and likewise his mouth was opened so that his bloodied tongue was seen. His fingers and arms, which were as if paralyzed, stretched themselves out. But when he had given up his spirit, his head sank toward his chest, his hands lowered themselves a little from the place of the wounds and his feet had to bear most of the weight of the body.

Then my hands became numb, my eyes were darkened, and my face became pale as a dead man. My ears could hear nothing, my mouth could not speak, my feet trembled, and my body fell to the ground. When I got up from the ground and saw my Son looking horribly disfigured and more miserable than a leper, I submitted my entire will to his knowing with certainty that everything had happened according to his will and could not have happened unless he had allowed it. I therefore thanked him for everything, and so there was always some joy mixed with my sadness, because I saw that he, who had never sinned, had, in his great love, wanted to suffer this much for the sins of mankind. Therefore, may all those who are in the world contemplate how I suffered when my Son died and always have it in front of their eyes and in their thoughts!”……..

“My daughter, consider the suffering of my Son, for his limbs were like my own limbs and his heart like my own heart. For just as other children use to be carried in the womb of their mother, so was he in me. But he was conceived through the burning charity of God’s love. Others, however are conceived through the lust of the flesh. Thus, John the evangelist, his cousin, rightly says: ‘The Word was made flesh.’ He came through love and was in me. The Word and love created him in me. He was truly for me like my own heart. For when I gave birth to him, I felt as though half my heart was born and went out of me. And when he endured suffering, it felt like my own heart was suffering. Just as when something is half inside and half outside – the half outside feels pain and suffering, but the inside also feels a similar pain – so it was for me when my Son was scourged and wounded; it was as if my own heart was scourged and wounded.

I was also the one closest to him at his suffering and I was never separated from him. I stood very near his cross, and just like that which is closest to the heart stings the worst, so his pain was heavier and worse for me than for others. When he looked at me from the cross and I saw him, then tears flowed from my eyes like blood from veins. And when he saw me so stricken with pain and overwhelming sorrow, he felt such a sorrow over my pain that all the pain of his own wounds became as subsided and dead for the sake of the pain he saw in me. I can therefore boldly say that his pain was my pain since his heart was my heart. For just as Adam and Eve sold the world for an apple, so my Son and I bought back the world as with one heart. Consider therefore,
my daughter, how I was at the death of my Son, and it will not be hard for you to give up the world and her cares.”…..

But now you may ask: ‘How do they crucify him?’ First off, they fasten him on the cross they have prepared for him when they do not heed the commandments of their Creator and Lord, but dishonor him when he warns them through his servants to serve him, and they despise this and instead do what pleases them. Then they crucify his right hand when they hold justice to be as injustice, saying: ‘Sin is not so heavy and abominable to God as it is said. God does not punish anyone for all eternity; he only threatens us with these hard things to scare us. Why else would he redeem man if he wanted us to perish?’ They do not consider that the least little sin a man finds delight in is enough to damn him to an eternal torment, and that God does not let the least little sin go unpunished, just like he does not let the least little good deed go unrewarded.

When his enemies crucified him, they did four things to him: First, they crowned him with a crown of thorns. Second, they pierced his hands and feet. Third, they gave him gall to drink. Fourth, they pierced his side. But now I complain that the enemies of my Son, who are now in the world, crucify him more cruelly in a spiritual sense than the Jews who crucified his body. For even though the divinity is unable to suffer and die, still they crucify him through their own vices and sins. For if a man insults and injures an image of his enemy, the image does not feel the damage done to it; nevertheless, the perpetrator should be accused and judged for his evil intention to do harm as though it was a deed. In the same way, the vices and sins by which they crucify my Son spiritually are more abominable and heavy to him than the vices of those who crucified his body………there are 12 books of revelations, some of them with 144 chapters.